Alright, since this week has been all about using some common sense when dealing with Social Media, I thought I would take the time to post an excerpt from the first boob title in the Average Joe series. This is a portion of the chapter that deals with using a little common sense when on the internet.

I would be remiss if I talked about common sense on the internet and did not even mention social media. Every time I look at my Facebook wall or Twitter stream, I can’t help but wonder if these people switch their brains off when they turn on the computer. 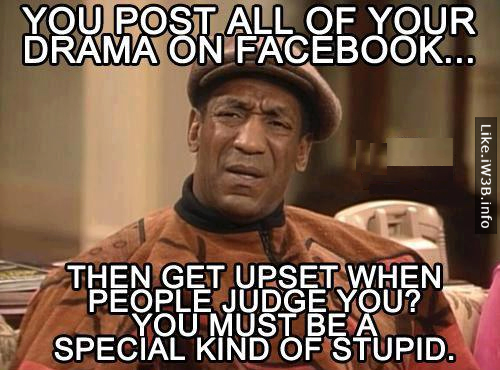 That pretty much sums it up. Thanks Bill! (yes, I know this is not really a quote from Cosby)

But really, it is scary the kind of crap people will say on social media. Lets’ look at a couple of scenarios where common sense should be used.

I think you get the picture. We could do this all day. the bottom line is, use your brain before posting on social media. You have the time to sit and think about what you want to type, and redo it if it doesn’t sound right once you do type it. How often do you wish you had that chance with spoken words? So take advantage of that opportunity when you have it.

It’s scary to think of how little people actually think about what they are saying online. People will do and say things via the internet that they would not even consider in real life. In the past, it was easy to hide behind anonymity online, but those days are long gone.

We no longer go by names such as “4X4Man” or “PrissyPrincess”. Nope, it’s your real name out there on sites like Facebook. There are those people who use a bogus name, but most people are leery of them these days. We have grown accustomed to seeing a real name, and some random screen name now seems odd to us.

So remember, it’s your life. People have lost jobs over posts on Facebook. Family members get to see the aftermath of the party when your friend posted the pics and tagged you. Be smart online. The gap between your online life and the real one has gotten significantly smaller.

One thought on “Random Rant – More on Social Media”